Once heralded as the alternative fuel source of the future, biofuels have come under scrutiny recently with a number of reports suggesting they cause more harm to the environment than originally though. Vikki Miller investigates 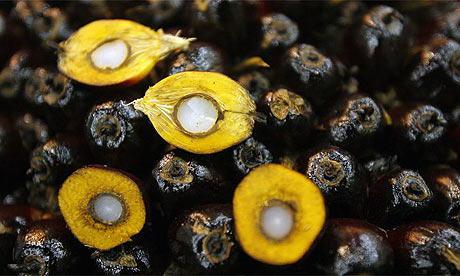 Oil from palm kernels is seen as an example of ‘bad’ biofuel. Photograph: Getty Images

Biofuels can be made from any organic source that can be rapidly replenished. The two big players in the market are biodiesel and bioethanol – liquid fuels made from living organisms, such as plants and animals, and their by-products. They are considered more renewable and sustainable sources than fossil fuels, and are one of the few technologies with the potential to displace oil for use in transport.

Where do we get them from?

Most biofuels currently used come from agricultural crops. Different countries specialise in certain types of biofuel, according to their climate. In Europe it’s rapeseed, wheat and sugar beet, while the US primarily harvests corn and soybeans. Sugar cane tends to be grown in Brazil and a huge amount of palm oil comes from south-east Asia.

But the smart money is now on second generation biofuels – where a much wider range of substances, including manure, food waste, wood, straw and sewage, are broken down to create biofuels. Here the whole crop can be used so you get much more bang for your carbon buck – but experts say it will be five to ten years before they become commercially viable.

There are particularly high hopes pinned on algae and jatropha , an ancient toxic bush found in the Americas, Africa and Asia.

Even the most unlikely products can be turned into biofuels, including chocolate, leftover sweets and chip fat.

Are they a new invention?

Not at all. The diesel engine, invented by German engineer Rudolf Diesel in 1892, was first made to run on peanut oil. In the early 1900s, Henry Ford designed one of his very first vehicles to run on ethanol.

Why did we stop using biofuels?

Cheap crude oil, especially from the Middle East, diverted interest and research away from biofuels. Oil’s low price gave it dominance in the market.

So why is there renewed interest?

Growing concerns over climate change, rising oil prices and insecurity of supply mean that governments and industry are desperately searching for alternative fuels. George Bush’s drive to reduce dependence on foreign oil led him to decree that by 2025, the US should replace 75% of imported oil with biofuel. The EU embraced biofuels as a key factor in a low-carbon future, and set a target that 10% of transport fuel will be biofuel by 2020.

Are biofuels expensive to buy in the UK?

Pull into a filling station and a litre of biodiesel will cost around 90p, but only a limited number of stations stock biofuels. However, there is a growing market for home-made biodiesel. The fuel costs between 15 and 80p per litre to produce, mainly dependent upon the price of the crop. Since July 2007, production of under 2,500 litres per year for own use is duty-free, which equates to around 25,000 miles in a conventional vehicle for what could be as little as £375 a year.

In April, the government introduced the Renewable Transport Fuel Obligation (RTFO), under which at least 2.5% of fuel sold in petrol stations must come from crops such as soy or palm oil. This level is due to be gradually raised; the European commission is aiming at 10% by 2020.

What are the benefits?

The plants and by-products used to make biofuels are renewable (as fresh supplies can be produced as needed) so in theory there is an unlimited amount and secure supply. It also helps that biofuels are not restricted to a certain number of countries that can control supply. Another plus is that they can be easily used within existing car and lorry engines.

Are they good for the environment?

Biofuels are theoretically carbon neutral because when burnt, the carbon they release has been offset by the amount they absorbed whilst growing. When you take into account the carbon used when harvesting, refining and transporting the fuel, the equation is less favourable, but still considered to be better than fossil fuels.

Are there any negative impacts?

Biofuels are coming under increasing criticism for having a bigger environmental footprint than first thought. Despite releasing less carbon emissions when burnt, growing the crops that produce biofuels can lead to an overall increase in carbon in the atmosphere.

The rising appetite worldwide for biofuels means that there are economic incentives in destroying peatlands and rainforests to provide more plantation land. Vast amounts of greenhouse gases are released by clearing the land and some scientists say this is enough to negate any of the intended future savings. This also has a major impact on the conservation of plants and animals living in these areas, as well as water patterns and soil protection.

It is now recognised that there are also harmful social and economic impacts. Food shortages are on the rise in poorer countries, as farmland traditionally used for food and animal feed has been turned over to grow crops suitable for biofuels.

Added to this, the increase in demand for crops, such as rice, corn or soya, which can be used as both food and biofuels, has forced the cost up, pricing people in poorer countries out. In Mexico last year there were riots after the price of maize quadrupled, pushed up by the demand for biofuels.

Are some biofuels better than others?

The best performing biofuels, such as ethanol produced from sugar cane in Brazil, can deliver 10 times more energy than that required to produce them, and release a quarter of the greenhouse gas emissions compared to their fossil fuel equivalent.

In contrast, the worst performing biofuels deliver significantly less energy, and contribute indirectly to greenhouse gas emissions through forest fires and clearing to make way for plantations. Biodiesel produced from palm oil in Indonesia is often cited as an example of ‘bad’ biofuel.